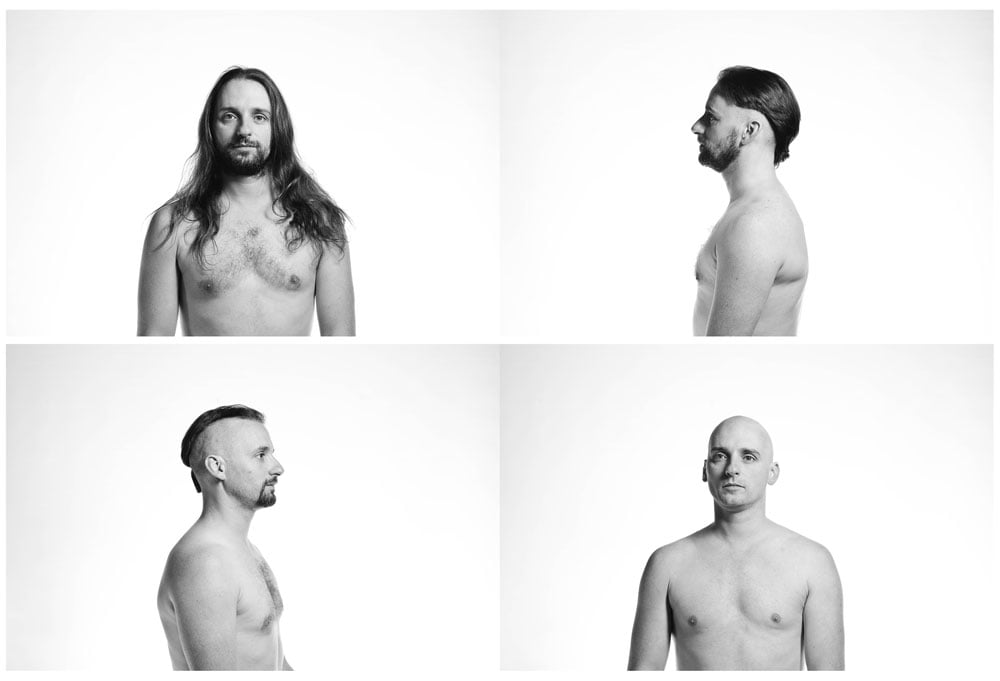 How can 120g change your way of looking at someone?

In a world where appearance is everything.

Do clothes make the man?

When 120g of hair can make you go from Jesus to a GI to a Buddhist to a drug cartel member.

Beyond appearances, what remains?

Made at a key moment in my life, assisted by the woman for whom I left Paris.

I also change media, goodbye actor, the artist evolves. It is time after the illusion of the stage to look at ourselves in the face and in all humility to see what will happen.

So how much psychological work is involved in this exercise? A cathartic form of self-acceptance?

Of course I thought of Erwin Olaf?s self-portraits, especially the famous trilogy: "I wish" "I am" & "I will be".
But here, unlike Cindy Sherman, there is no staging, no theatrics. Simplicity, purity, an almost clinical form, which plays on the first, slightly "jokesque" aspect of the first reading, as a clue to other degrees of reading.

120 g difference is the weight of hair that went into this adventure. I was expecting more!

The symbolism of hair is strong in all civilisations. It is often linked to intimacy, seduction, modesty and sexuality through tricophilia (or hair fetishism), the relationship with the other through hair (combing, plucking, cutting) being a mark of affection.

Long hair was the privilege of the nobility when the people began to cut their hair.
Symbol of strength, virility, in men: the most famous example is certainly that of Samson. "If I were shaven, my strength would leave me, I would become weak, and I would be like any other man. The Bible - Judges 16.

At the Liberation, women accused of having had affairs with enemy soldiers were sometimes shorn.
However, this sacrifice can be voluntary as a symbol of mourning or in a religious context: Buddhist monks shave their heads as a sign of humility. In ancient Greece, it was a widespread custom for young girls to cut their long hair as an offering to Artemis on their wedding day. As the haircut does not change the shape of the head, it can also be seen as a return to the original shape without artifice, without any desire to seduce.